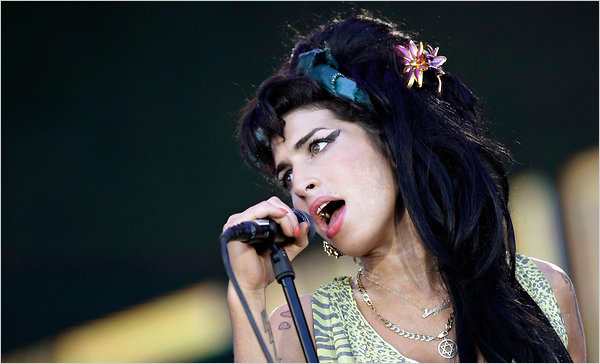 Amy Winehouse, did not really get my attention when her single, 'Rehab' was aired in Malaysia back in 2007. I thought that the song was old, the singer was old and the music was boring but when I heard the song "You Know I'm No Good" being aired in the radio months after that, I was caught in a serious addiction. I love the lyrics of the song because it is so simple yet meaningful; and the music she portrayed was really extraordinary.

Then I downloaded the whole album, "Back to Black" and was hooked to songs like "Love Is A Losing Game", and "Tears Dry on Their Own". Then I tried listening to "Rehab" one more time and cannot stop playing it on my stereo; that was "The Winehouse Effect I got in 2007. A year after if I am not mistaken, she won Grammy awards and performed live from London for the award show, and somehow her husband divorced her few months later I am not too sure.

That was the peak of all of her back to black days. She went to the rehabilitation center, her health became worst, got addicted to drugs and alcohol and I did not hear from her for quite a long time. Then only this morning I woke up with the news that she was found dead in her apartment in London at the age of 27 years old; it was a serious shock for me and most of my friends on Facebook. I know most people hated her bird nest-kind-of-hair, the thick eye-liner and stuffs but there are more people feeling the loss, I am sure.

I totally agree with the quote inserted in this blog post because most Western artists died at a very young age. They died because of mistakes like suicide, overdose of sleeping pills and drugs while they can be making huge success with their talents. I hope that Malaysian artists and citizens will never follow this trend because it is ridiculously stupid; God has given you guys and girls such talents so please make full use of it.

Well, I should not be making such a strong sweeping statement by using the word "stupid" but I really have to remind all of us because that is the fact. Now, we should never blame the late Amy Winehouse or anybody else because we never really know the truth about her death. Dear Ms. Winehouse, you have been such a great influence in my choice of music and you will be forever missed. Rest-in-peace.