Good day everybody! This is a delayed blog post of Astro On-The-Go Party held at The Pool, Jalan Ampang on 23rd June 2012.

The dress code was our favorite football jersey in conjunction with Euro 2012 and we gathered there at 6.30 PM with other bloggers and Nuffnangers!

The Pool is a really cool place to hang out with friends and it can accommodate more than 100 guests based on my observation.

I went there with Anam Khazali, a friend of mine since 2004 but we rarely meet after both of us further our studies in different universities.

There, we were served with a free-flow of drinks such as Pepsi, Sprite and Coke and the service was super fast! We did not have to wait for a long time to get our drinks refilled, really!

At about 7 PM Adam C kick-started the best Astro On-The-Go Party to the media. Astro On-The-Go is the latest innovative service by Astro where we get to watch Astro channels on our iPads, iPhones and also our laptops anywhere on earth when we are on the go! Yes, up to 11 TV channels so far to choose comprising of news, learning and entertainment, non-stop! So how to start watching Astro On-The-Go on your mobile devices?

or view it on the web: http://onthego.astro.com.my/. Download link for Android devices will be available soon. Then all you need to do is to register an Astro ID at http://www.astro.com.my/onthego/ and log in you ID to your Astro smart-card to gain access to the subscribed channels. Once the account has been linked, users can now enjoy Astro On-The-Go with your preferred devices.

Astro On-The-Go will be available in three phases:

Phase 1: All Astro customers will be able to experience free preview of Astro On-The-Go until 31st August 2012.

Phase 2: From 1st September 2012 onwards, Astro B.yond IPTV customers and customers with more than one decoder will be entitled to Astro On-The-Go. To top it all, this brilliant service will be available on Android devices too by this time, cool right?

Phase 3: Astro On-The-Go is offered to all customers and subsequently to non-Astro customers by the end of the year.

No charge is imposed on Astro users since this service is made for your viewing pleasure; no need to rush home for your favorite shows because with Astro, everything is On-The-Go! Customers can enjoy immediate access to:

Video-On-Demands (VOD): Library of local and international titles from Astro First movies, Sundance movies and movies from around the region accessible via broadband connected PVR-enabled decoders.

Catch Up TV: Mobile access to the best of Astro including drama series, reality shows, sports highlights, learning and education, plus local and international programs based on customers current DTH package subscription.

Our next agenda after the briefing of Astro On-The-Go is EATING! Yeay, Astro is very generous for throwing such a happening poolside party inclusive of tantalizing buffet that I could not miss! Seriously, I totally had a lot of Chicken Cordon Blue, spaghetti, salad, and many more mouth-watering delicacies!

Next up is the first ever synchronized iPad flash-mob and the team would be on-the-go all over the town so look out for them alright?

This is what the sync iPad flash-mob would look like, a giant TV screen made up of iPads hehe. (Photo credits to Joel Wong).

The Pool is so cool right? I love this place so much at night! Okay, after dinner Adam C called us to make a team of 5 since there was a special game for the bloggers. I teamed up with Red Mummy, Cik Lily Putih and the other two guys and we are Team Denmark!

There were three stations that night and we had to juggle a ball for 30 seconds, posed in front of the camera with the task given and also searched for the flag of our team, which was Team Denmark.

Each team also had to compete other teams in the Foosball Challenge but too bad Team Denmark lost to Team Spain but we had fun!

After the game ended, Adam C announced the winner of the game and Team Germany won! Then Adam also called out 5 contestants for the Best Dress Award! Yeah, since they were all glamorously attired in their football jersey, plus with make up and wigs on, they really deserve to be the finalists! They had to catwalk on the runway and Red Mummy was announced as the winner of the brand new iPad III!

I totally had a blast at Astro On-The-Go Poolside Party eating a lot and spreading my circles to all social media influencers, alhamdulillah! Special thanks to Astro and Nuffnang for inviting Azham Vsvc/The Socialite to your happening party!

Oh yeah, before I headed home, I took a photo with my idol in TV hosting industry, Mr Adam C! That was the third time I met him and he was very down to earth and sweet to everybody. One day I would like to work in Astro as a journalist/TV presenter like him, insyaallah! 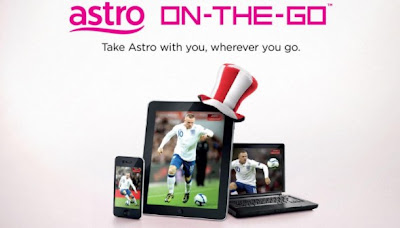 Dear my blog readers, kindly register with Astro On-The-Go especially when you are already an existing Astro subsribers. You have your favorite channels now on iPads, iPhones and laptops so why waste this golden service right? Oh yeah, I am in a dire need of a brand new iPad III too because I do not want to miss the chance watching MTV and Channel V on my private jet when I am On-The-Go ;)

This is the TV advertisement of Astro On-The-Go, more information on www.astro.com.my/onthego

Take Astro with you, wherever you go!
Posted by Unknown at 1:50 PM

insyaAllah..i will always pray for ur success :)u'll make a good journalist :)

Rizal: hehe...thanks dude! I need the prayers and support from my friends the most hehehehe